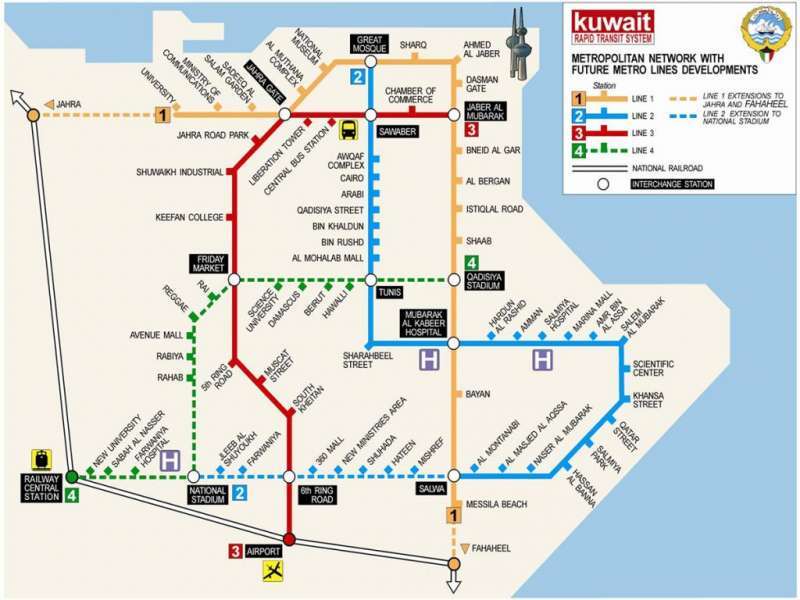 The Council of Ministers has urged concerned government agencies to push for the completion of the railway network project by removing all obstacles to implementation of the regional and southern road network, reports Al-Qabas daily.

A correspondence, which the daily obtained a copy, revealed that the Council of Ministers had been notified of the failure of both Public Authority for Roads and Land Transport and Kuwait Authority for Partnership Projects between the public and private sectors on the timetable related to measures for implementing this major development project. It called for the necessary mechanism to be put in place to overcome all obstacles in compliance with the decision of the GCC Ministers of Transport and Communications as concluded at the meeting of the Ministerial Committee for Transport and Communications of the General Secretariat, especially as 2025 is the target date for completing the GCC railway project.

The correspondence confirmed that Kuwait is behind the approved schedule and unable to accurately update its required schedule, because most of the conflicts were identified in coordination with relevant authorities.

With regard to obstacles, the correspondence identified contradictions in 10 entities that necessitate dealing with by “contracting with a global consultant” to prepare the studies and initial designs for the railway route, including thecbridges, tunnels and crossings for all roads and corridors intercepting the route, while developing engineering solutions and technical specifications appropriate for protecting or relaying the conflicts.

It stated the project is of utmost importance, as it is one of the major development projects at the level of all Gulf Cooperation Council countries, due to agreements among the cooperation countries to establish a unified railway to connect the Gulf countries and to provide safe means of transport for its users.

It indicated the path would start from the State of Kuwait through Dammam (Saudi Arabia) to Bahrain, then Qatar through the Salwa Port, which would connect the State of Qatar to the Kingdom of Bahrain, and from Saudi Arabia to the Emirates (Abu Dhabi and Al-Ain), and the Sultanate of Oman (Muscat) across the state of Sohar.

Adherence to the decision

It stressed the need to appoint an international consulting office to carry out the study and preliminary design work, preparation of technical documents for the first phase of the railway project, and directing the Ministry of Finance to approve the required budget for the Partnership Authority to complete the study and design work for the first phase- according to the time specified for the project in the development plan, given its importance as a vital project.

There is a need to ensure the existence of security and military crossings that allow concerned authorities to cross the railway path at predetermined points, car and pedestrian crossings, and camel traffic crossings, in addition to studying all service lines and public facilities such as water, sewage, rainwater drainage, communication networks and fiber optic cables. It also includes water and electricity lines, especially high-pressure pneumatic lines and related towers, amid the development of solutions to maintain services based on specifications, standards and the technical requirements of relevant authorities.

The correspondence indicated the first phase of the project is supposed to include the route of the Arabian Gulf Cooperation Council, in addition to the 154km Mubarak Al-Kabeer Port link in Kuwait- bringing the length of the first phase to 265 km through the passenger terminal in Kuwait City.