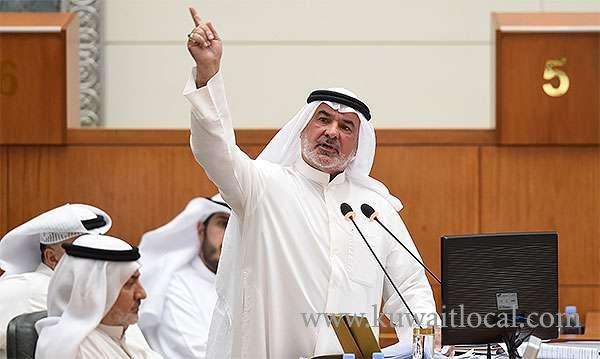 The Public Authority for Manpower (PAM) is not serious in correcting the lopsided population structure of the country, says MP Saleh Ashour.

Ashour made the statement based on information he obtained that the Egyptian Labor Directorate is receiving approximately 5,000 applicants to work in Kuwait every month. “If this number is consistent, there will be around 60,000 new workers per year,” he pointed out.

He urged all concerned ministers to stop the recruitment of a large number of expatriate workers and address the lopsided population structure issue immediately as it will continue putting tremendous pressure on public services.

In another development, MP Ahmed Al-Fadel said the next legislative round will witness ratification of more laws than the previous rounds, pointing out the number of legislative achievements has increased since the beginning of the 15th term.

He revealed the first round of the 15th term witnessed the passage of six laws and this number doubled in the second round with the ratification of 12 laws. He cited the most important draft laws that will be addressed in the next round such as the Journalism Bill, which is currently under deliberations at the parliamentary Educational Affairs Committee; as well as the proposed amendment of the Sports Law to increase government’s financial support for sports clubs from KD 750,000 to KD 1.5 million.

Residence Transfer Of Children To Mother Stopped The General Administration of Residency Affairs decided to stop transferring the residency of the children to their mothers in cases where the father has left the country permanently or his residence ... July 31, 2020 0 8034 Category: Kuwait

Kuwait Opens Airport. More Than 10,000 Tickets Cancelled As Kuwait opened its Airport for commercial operation today, according to reports, more than 10,000 tickets will be cancelled after the sudden decision to ban commercial aviation with 31 countries. ... August 01, 2020 0 7994 Category: Travel

Kuwait Bans Entry From 31 Countries Kuwait today expanded the list of countries, from which it is prohibited for people to enter Kuwait. As the Kuwait airport started commercial activities today, the Civil Aviation Authority announced t... August 01, 2020 0 5767 Category: Travel

India Signs Air Transport Bubble Agreement With Kuwait India and Kuwait have signed a transport bubble agreement which will enable air carriers to uplift stranded passengers both to and from India. However, since Kuwait has issued a temporary ban of re... July 31, 2020 0 5627 Category: Travel

Kuwait Approved PCR Testing Centres in India Testing for the coronavirus has been very much in the news. The first and most urgent focus is on increasing access to tests to diagnose people with current infections. Doctors use PCR test to diagnos... July 30, 2020 0 5286 Category: Coronavirus

List Of Travel Ban Countries May Change Continuously - Govt Spokesman The Kuwait Government spokesman Tariq Al-Muzaram said that there was no exception for those coming from any country to Kuwait from presenting the PCR certificate, which is mandatory according to healt... August 02, 2020 0 4851 Category: Kuwait

Expats From 7 Banned Countries Can Enter Kuwait If They Have Stayed In Other Permitted Country For 14 Days The Directorate General of Civil Aviation stated that residents from the seven declared countries (Bangladesh, the Philippines, India, Sri Lanka, Pakistan, Iran, Nepal) is not related to the citizensh... July 30, 2020 0 4779 Category: Expats

Expatriates Who Left Kuwait After September Can Now Return Expatriate residents who have left Kuwait after September 1, 2019 can re-enter Kuwait as per a circular issued by Kuwait’s Directorate General of Civil Aviation DGCA allowing passngers to be abl... August 01, 2020 0 4765 Category: Kuwait
Popular Offers