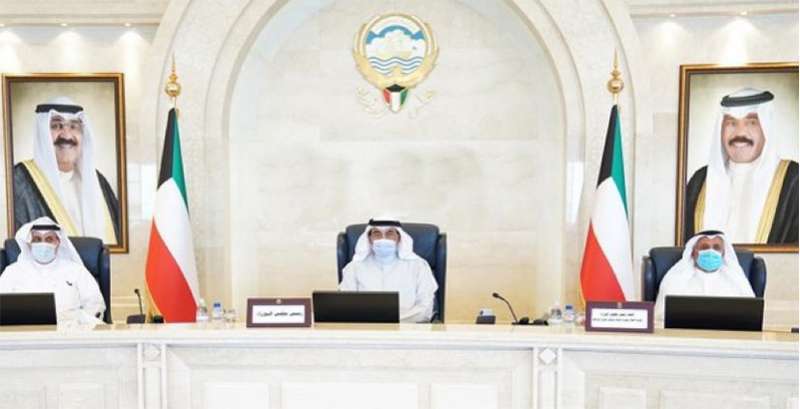 The Cabinet held its weekly session at Seif Palace on Monday under chairmanship of His Highness the Prime Minister Sheikh Sabah Khaled Al-Hamad Al-Sabah. Following the session, Foreign Minister and Minister of State for Cabinet Affairs Sheikh Dr. Ahmad Nasser Al-Mohammad Al-Sabah stated that he briefed the ministers about his participation in the 75th session of the United Nations General Assembly, during which participants discussed events in the occupied Palestinian territories.

During the UNGA session, the foreign minister, head of the State of Kuwaiti delegation, affirmed full support for Arab, Islamic and international efforts to halt the Israeli aggression, revive the peace process and negotiations in line with international references in a manner that would enable the Palestinian people attain their full legitimate rights.
For his part, Minister of Health Sheikh Dr. Bassel Al-Humoud Al-Sabah informed the ministers about latest developments related to the coronavirus at the local, regional and global levels, noting that the recovery rate was recorded at up to 95.3 percent along with drop of daily casualties.

In this vein, the Cabinet urged anew citizens and residents of the country to continue taking precautions, namely averting crowds, seek to take vaccinations against the virus to pave way for attaining the aspired objectives, stemming spread of the contagion. Keen on executing the state strategy of tackling the housing issue, in addition to the funding offered by the Kuwait Credit Bank and local banks for supporting the sector as well ensuring relevant legal insurances, the government approved a bill with respect of funding private housing, and submitted it to His Highness the Amir pending referral to the National Assembly.

Later during the session, the executives listened to statements by Deputy Prime Minister and Minister of Justice and Minister of State for Integrity (Nazaha) Enhancement Abdullah Al-Roumi and Interior Minister Sheikh Thamer Ali Sabah Al-Salem Al-Sabah about the by-election that ended with Dr. Obaid Al-Mutairi winning the vacant seat in parliament.
The ministers expressed satisfaction at the efforts done by the ministries of justice, interior, information, education and health for ensuring a sound election.