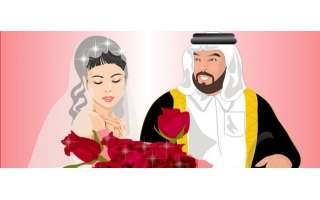 The absence of openness, the lack of a sense of responsibility and adultery were cited among the major reasons for divorce in Kuwait in 2015.

The justice ministry said that the change in the behaviour of spouses after marriage, negligence, domestic violence, and the interference of families were the other reasons cited in filing for divorce.

According to the ministry, 32 Kuwaiti couples divorced in the first three months of the year, representing 1.9 per cent of the 1,601 marriages contracted.

The figures showed that the total number of marriages in the country, including between non-Kuwaitis, was 2,120 with 39 ending in divorce, a 1.8 per cent rate, Kuwaiti daily Al Watan reported on Tuesday.

About one quarter of the Kuwaiti men who got married during the January-March period took foreign wives. However, six of the 385 marriages ended in divorce, the ministry said.

Kuwaiti women took 134 non-Kuwaiti husbands, and only one marriage ended in divorce.

The numbers show that mixed marriages have the lowest divorce rate in the country.

The figures indicated that 344 marriages were contracted between people staying illegally in the country — a term used by the local authorities to refer to the Bidoon (stateless) residents.

However, the divorce rate reached alarming levels within this segment of the society amounting to 37.5 per cent of the marriages.

Gulf countries have some of the world’s highest divorce rates, prompting the local authorities to seek out solutions to control the phenomenon related mainly to a demanding lifestyle and a high status consciousness.

Lifting Of Total Curfew from Sunday Morning - Residents Can Move Within The Lockdown Area Lifting of the total curfew will begin from Sunday morning 6:00 am, and it is not allowed to walk around and leave on Saturday night. The residents inside the areas under lock-down are allowed to g... May 30, 2020 0 20442 Category: Lockdown

Information about Partial Lockdown,Isolation,Phases and Excluded Areas from isolation Cabinet Meeting Decissions, between every phase there will be three weeks gap Phase 1 =  Kuwait turns to partial curfew from 6 PM to 6 AM = Cabinet decided to place new districts in iso... May 28, 2020 0 15731 Category: Lockdown

Air Ticket Prices Will Increase … But Won’t Be Exorbitant Jazeera Airways Board Chairman Marwan Boodai confirmed that prices of air tickets will increase in the coming period, but he was quick to add the prices will not be exorbitant; while traveling befor... May 26, 2020 0 9463 Category: Travel

NRI’s Can Leave India With Strict Conditions As India’s repatriation exercise continues, the Union home ministry has now outlined stringent protocols for non-residential Indians to return to their destination countries. While the Centre... May 28, 2020 0 6970 Category: India

Kuwait Airways to Lay off 1500 Expat Employees The senior management of Kuwaiti Airways is planning to end the services of 1500 expats out of a total of 6000, according to a local daily. However, Kuwaiti citizens past the age of sixty will be exem... May 28, 2020 0 6702 Category: Kuwait

Kuwait To Restore Normal Life After May 30.. Kuwait government will not extend full curfew due to end Saturday, May 30 and will turn to partial curfew to pave way for restoration of normal life, Deputy Premier and Interior Ministry Anas Al-Saleh... May 25, 2020 0 5296 Category: Coronavirus

Filipino Infected With Coronavirus Jumps From 3rd Floor A Filipino infected with coronavirus committed suicide by jumping out of the window of his apartment located on the third floor of a building in Al-Farwaniya area. A security source stated that the... May 28, 2020 0 4633 Category: Coronavirus

16 Flights From Kuwait To India From May 29th to June 7th - Vande Bharat Mission Ministry of External Affairs release: Please note :- This is a dynamic list and is bound to undergo changes based on operational, technical and other considerations. The list should not be considered ... May 26, 2020 0 4547 Category: India

Sri Lankan Woman Arrested For Insulting Kuwait Securitymen of Cyber Crime Dep. have arrested a Sri Lankan woman who appeared in a video on social media insulting Kuwait's decision to take steps to prevent the spread of coronavirus and the Kuwa... May 28, 2020 0 4281 Category: Crime News
Popular Videos