Decreased when oil prices fell and the Kuwait Stock Exchange ( KSE ) dropped sharply in 2014 , it began to turn the attention of investors to the gold market Which is one of the safest sectors in the investment market, it occupies Kuwait ranked 37th in the world with respect Baanaatadtha of gold amounting to 79 tonnes, The amounts of gold , which entered the Kuwaiti market in 2014 , about 40 tons, has been draining more than 80% of her at the end of the month of October / October of the same year - Source: Achieving publication on the new Arab site.

When a talk about run and s principal of the traditional investment in stocks and bonds and the investment in precious metals can us the saying that stocks and bonds are classified as equity in the sense that the owner of shares or bonds owns part of the company that issued her or has a stake of the profits earned by the company, while classified as precious metals as commodities in the sense that the owner of the precious metal has a product of material a particular a particular, and the shareholders reap the money when the companies that own the shares to increase profits or to improve the status of the market , which Leads to increased demand and a desire to own a Shares in these trap data and thus rising share the price, and on the other hand , earns investors precious money metals when demand for precious metals increases, leading to the price increase the expeditious (actual) of Amaaantm and thus are making a profit, and historically outperformed the stock market Largely on traditional precious metals , which have long been considered as a hedge against inflation and risk investments (as opposed to investment , which seeks to profit), however , and over the past years we have noticed superiority of a notable investment in precious metals, especially gold and silver.

And according to achieve published by Al - Arabiya on its official website in December 2017, it has achieved gold during the year 2017 strong gains to be the strongest investment ever since 2010 , reaching US gold futures gains on the Comex Stock Exchange 11.8% in 2017 registered a second annual increase respectively , despite the economic and geopolitical major impact on the global stock gains of uncertainty, and predicted then CEO of Kuwait bullion trade of precious metals Rajab Hamid That gold prices continue to rise in 2018 due to the adverse impact of the dollar " The impact of the reverse dollar is one of the biggest engines. With the weakness of the dollar, funds are rushing towards gold , And prices have benefited since 12 December 2017 after raising interest rates and this trend will continue in 2018 Due to geopolitical fears , "Hamed predicted an increase in investors and the flow of funds and investment funds and central banks to buy gold, although prices saw a temporary correction movement , He noted that as long as the sustainability of the market and the sustainability of the recovery of the dollar declined, the demand for gold would continue He stressed that the digital currencies fell on top of the Bitcoin in the interest of higher gold prices in 2018, and you will find in the figure below the price of gold between 1975-2015 and affected by political events and wars (source site Ryalst supermarkets). 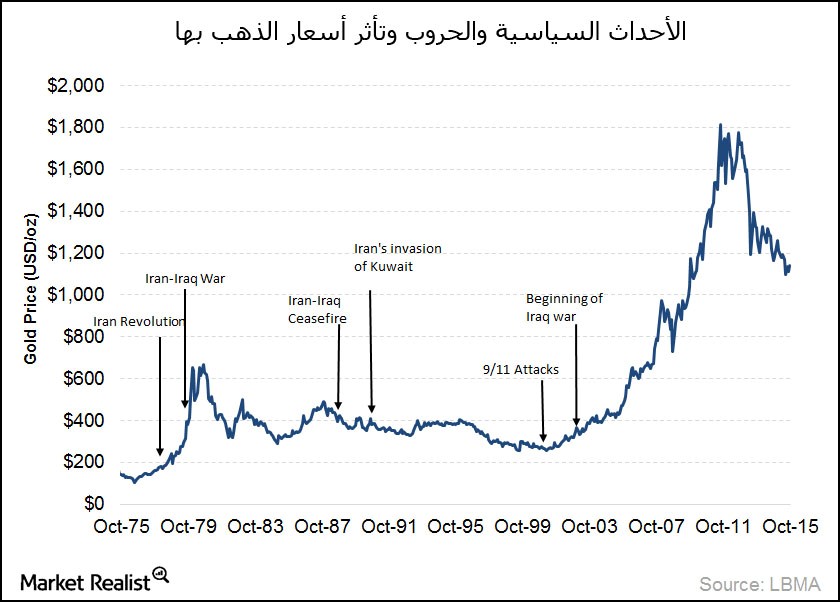 In a new statement to Syed Hamid , CEO of alloy Kuwait on 29 of the month of May 2018 t occurred where the Coheres gold above high levels , adding that US $ 1300 per ounce level was still the lowest and the strength of the dollar did not affect the gold in mystify the analysts in the markets, and the observer for the gold markets in which finds a mirror that reflects the geopolitical and economic conditions in the dollar on top of gains and gold above barrier of $ 1,300 per ounce, and by the political tension data in general in the past week , gold fell to $ 1280 an ounce today back again to rise because of the crisis Europe between the Italian elections on the one hand and expectations about the Spanish elections, and the belief that what is happening in the euro zone may be the supporter of high gold prices to reach $ 1306 per ounce, and the gold is still a coherent of since the beginning of the year up to the $ 1,300 per ounce , which is a Lows level, no matter how strained the geopolitical atmosphere of or even if the economic news has improved , there will be no selling or liquidation of gold and this is the normal level for him, and puzzling here that the strength of the dollar did not significantly affect the price of gold continued gold gains , and we expect and even if t was raised widespread interest, the gold Mtma SEC and all of this not only because everyone is looking at gold as an investment to achieve successful returns a But rather View it as a safe haven against the vagaries of non - sustainability of the positive data and the lack of geopolitical stability, and long ago we were saying that gold reversed the dollar and the higher the value of the dollar , we find that gold will be at low levels , and this is the rhythm of the usual gold, in gold today in the $ 1300 per ounce limits As a result of that the dollar index is touching today 95 , and the dollar against the euro 1.15 and this has not been seen for a long time , and Hamid believes that the strength of the dollar is affecting gold and put it at this level, but the continuation of the strength of gold with the strength of the dollar will not last long and one will prevail over the other On the one hand a continuation of the rise, in all skeptical about the strength of the dollar , which does not maintain the value of the sustainability of positive data in the United States but noted they are the result of weakness in the euro and in the British pound and the weakness in the corresponding currency to the dollar, and E. Li Besides P US United States of America Has no hidden desire for the continued strength of the dollar and can not continue the strength of the dollar with the rise of gold side by side Gold is the one that will remain cohesive in the coming period and will be affected only by inflation factors.