What is Arabica coffee?

It wasn’t until recently, however, that I learned that the stronger blends mainly use the Robusta coffee bean, while the milder taste of many of my favorites is down to the fact Arabica coffee beans are the base. Arabica coffee has come to be more popular because of its more palatable taste.

Being curious about why the beans are called Arabica when so much of the coffee we drink comes from crops grown in Brazil, Columbia, Ethiopia and elsewhere, I decided it was time to get educated about where coffee came from in the first place, and how Arabica coffee began.

Where did coffee originate?
It turns out that there’s a legend that, long ago, a goatherd called Kaldi was tending his flock on the plains of Ethiopia, and noticed that some of his animals loved to munch the berries of a particular bush. He also noticed that the goats were so “full of beans” after eating the fruits that they then didn’t want to sleep at night. When Kaldi mentioned this to the local abbot, the monks made a drink from the berries – and discovered that it helped them stay awake too, so that they were more alert for morning prayers. 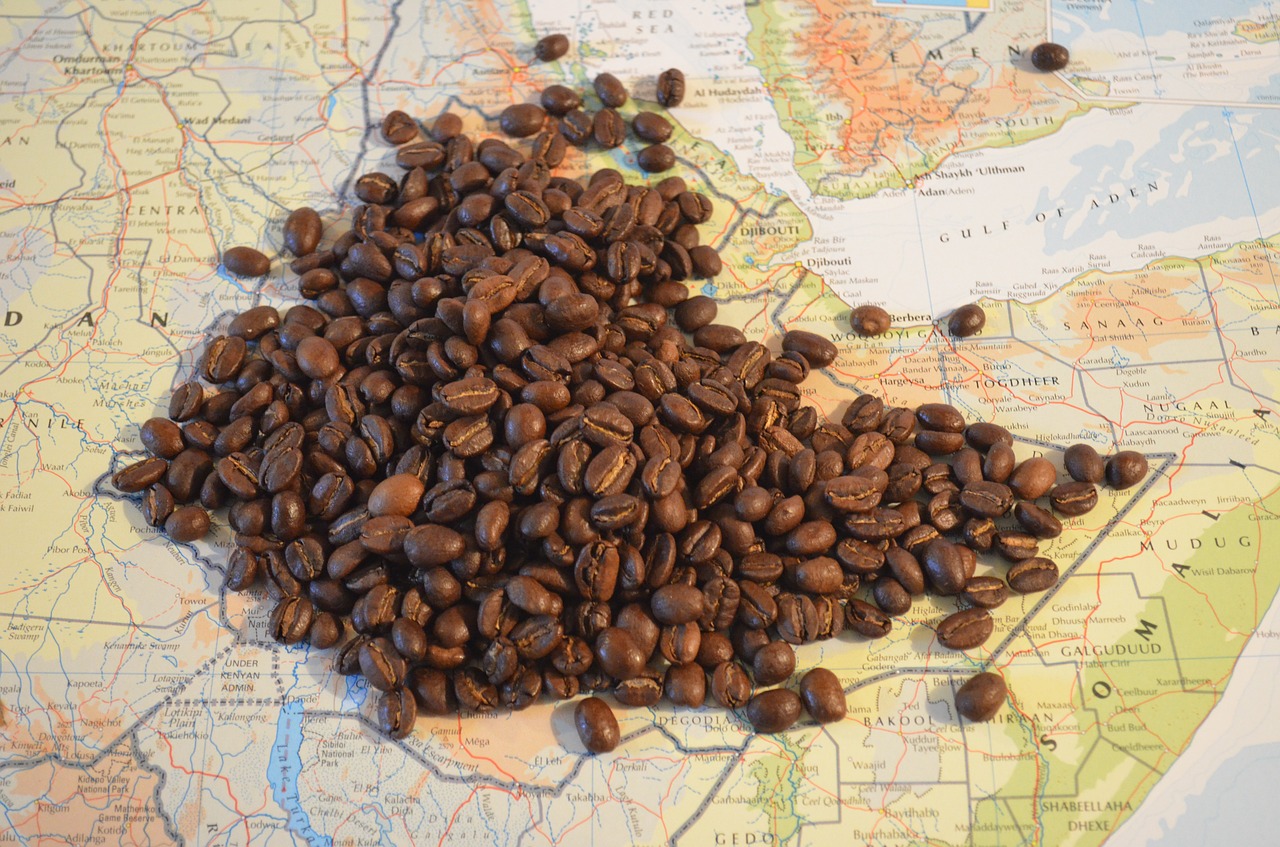 To the east of Ethiopia lay the Arabian Peninsula, which is where coffee, as it came to be known, was first cultivated and traded. By the fifteenth century, coffee was being grown in the Yemen District, where it is still grown today. By the sixteenth century, the peoples of Persia (now known as Iran), Egypt, Syria and Turkey were all very aware of its benefits, and a hundred or so years later, Venetian merchants are known to have been trading in the delicious beverage.

What does the Dutch East India Company have to do with all of this?

The way in which coffee plants first arrived in Europe is not entirely a tale of honor, however – the coffee-growing districts of the world obviously wanted to preserve their monopoly on this profitable crop, but they had reckoned without the Vereenigde Oostindische Compagnie, or the Dutch East India Company. In 1616, Dutchman Pieter van den Broecke, a VOC administrator and merchant actually stole coffee plants from a farm in Mocha in the Yemen and took them home to Amsterdam.

The northern European climate did not, however, suit the plant, and in 1696, the Dutch took the results of their adventure to Jakarta in Indonesia. Ten years later, seeds were returned to Amsterdam, which subsequently became the center of the coffee trade in Europe. In 1720, France received some coffee plants as part of a military agreement.

The French soon realized that their lush lands of the New World, many of which now form part of Central America, had ideal growing conditions for the crop. In the years leading up to the Revolutionary War of Independence, after the little disagreement with England about the tea, coffee became a very popular drink in America.

Variety is the spice of Arabica
Coffea Arabica was first used as a term by Carolus Linneaus, a Swedish botany expert, who wrote about it in his 1753 work Species Plantarum. There are, however, many different Arabica coffee bean variants. Typica is often described as the base plant for most Arabicas, with Bourbon and its mutation Caturra two more. Pache comum and Pache colis grow well in Guatemala, and Catuai and Catamor are the names of cross-blends which both involve Caturra beans. Many new varieties have been bred to be resistant to rust and fungal diseases.

Where does coffee come from?

Although a large percentage of the coffee we drink in our household comes from Colombia and Ethiopia, there are actually more than fifty countries which harvest this delicious substance, including Mexico, Hawaii, and even China. Some of the most productive countries are Brazil, Vietnam, Colombia, Indonesia and Honduras, with Ethiopia also a major player. Around seventy percent of the coffee crops now grown are of the Arabica variety.

Where do coffee beans come from?

Many of us would recognize the distinctive shape of dried coffee beans, but in their natural state, both Arabica coffee beans and Robusta coffee beans look more like cherries. Coffee is a plant which has a continuous cycle, meaning that you will often see flowers, ripe fruit, and green berries on the tree at the same time. It can take up to four years for a tree to bear fruit for the first time.

To create the beans we know and love, the coffee cherries are harvested, mainly by hand. The ripe berries are then dried as quickly as possible, most often by being spread out in the sun and regularly raked and turned until their moisture level has dropped as low as 11%. Some producers use a wet method, in which the berries are first pulped and then moved to a fermenting tank. They still need to be dried out before they can be used to make the Arabica or Robusta coffee we all know and love.

Arabica vs. Robusta
Despite the fact that Arabica is a more fragile crop than the stronger-tasting Robusta, it is by far the most popular variety to grow – in total there are currently thought to be somewhere between 25 and 100 different types of the coffee plant in this genus. Arabica plants are usually around 2.5 to 4.5 meters high, while Robusta plants tend to be a little taller, between 4.5 and 6.5 meters in height.

Arabica beans are more oval in shape and larger than the rounder Robusta varieties. Robusta typically has around twice the caffeine content of Arabica, and if you’re an aficionado of espressos or some of the stronger coffees, the chances are very high that you’re drinking a brew made from Robusta beans

Where is coffee grown?

In general, Arabica plants will tolerate cooler temperatures and less rainfall than Robusta, and will grow at altitudes from 600 to 2,200 meters above sea level. Arabica thrives at temperatures ranging from 15 to 24 degrees Celsius. Robusta will grow well at altitudes from sea level to 800 meters and is happy at temperatures between 18 and 36 degrees, although it is a much thirstier crop than Arabica – it requires 2,200 to 3,000 mm of rainfall to grow well, compared to 1,200 to 2,200 mm for Arabica. Coffee is an extremely important crop worldwide.

Where does our coffee originate?

As the world’s climate changes, coffee origin has become more important. As specialty blends become more and more popular, the demand for Arabica continues to rise, as does the overall vulnerability of this cultivated plant, which has relatively little genetic variation.

Sustainability in our crops is a major concern for all of us, and some expert botanists are now advising that we should look to Ethiopia, the original source of coffee plants, to ensure that the crop survives. Since the typical coffee shop relies on Arabica beans for most of its coffee varieties, we need to do everything we can to ensure that farmers are able to continue growing it. The idea of a world without coffee doesn’t bear thinking about, for multiple reasons.

Can you grow your own coffee plant?
While many of us may dream of having our own coffee plantation, a more realistic option is to grow our own plants on a small scale. On a domestic scale, coffee is a very easy and rewarding plant to grow. If you’re in a coffee producing country, start with a freshly picked coffee cherry. The rest of us should be able to buy green coffee to get started – make sure that it’s from a fresh shipment or your coffee plant risks taking longer to germinate, or not germinating at all. 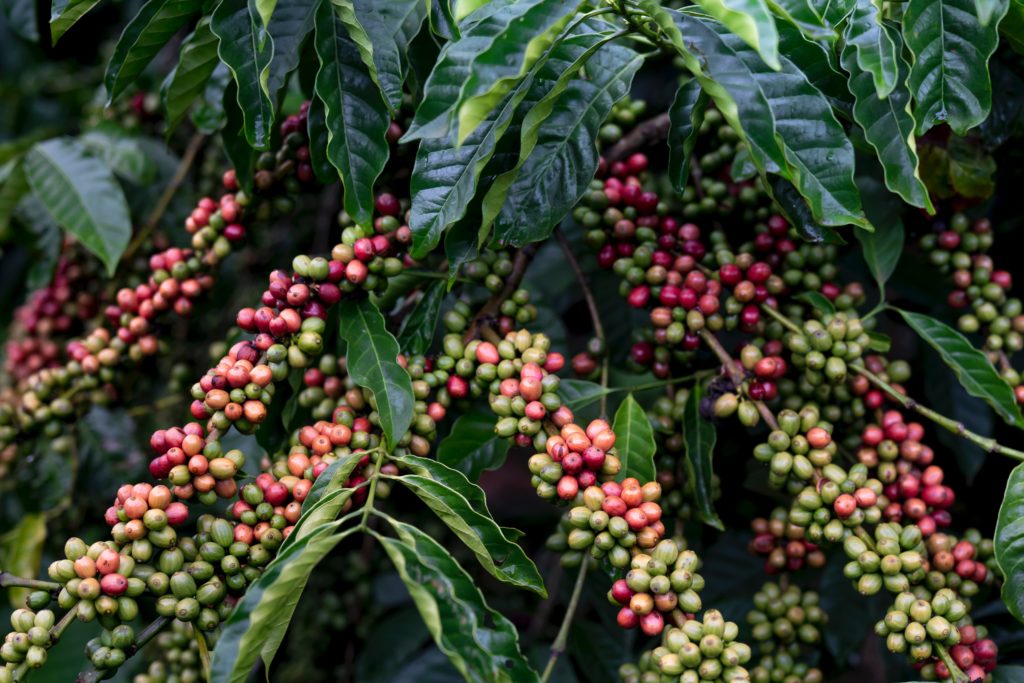 Coffee seeds are happy under artificial light and should be watered daily until they have germinated. Take care not to over-water, however; the soil needs to stay moist but be well drained. Once the plant has germinated, either leave it alone or transplant it to a porous, acidic soil high in nitrogen. Water the tree twice a week, once for full water and once for half water.

It is likely to take around two to three years for the tree to flower and produce cherries. One way to spur the plant into producing flowers is to wait for winter and reduce watering for around two or three months and then when spring arrives, water as usual again. Arabica coffee is self-pollinating.

Don’t expect your plant to yield a high harvest of coffee beans unless you’re at high altitude and observing the cycle and adjusting as appropriate daily, but a happy coffee plant makes a great talking point as well as an attractive addition to your houseplant collection. And in our modern world, there’s no need to steal coffee plants from unsuspecting farmers under the guise of being a respectable employee of the Dutch East India Company!